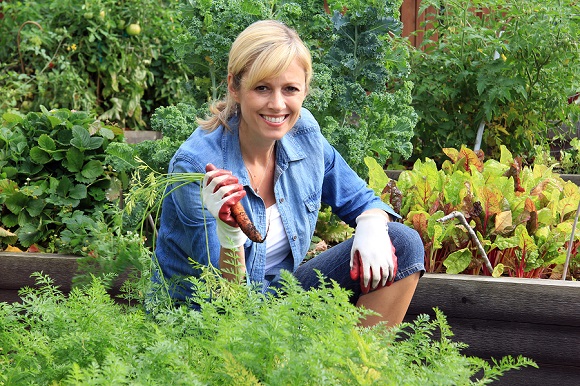 The scientific term for healthful bacteria that soil contains is Mycobacterium vaccae – a non-pathogenic form of bacteria found naturally in dirt. This amazing form of bacteria can increase serotonin levels that keep your mood upbeat and help reduce allergies and other physical disorders which arise from the “clean-obsessed” society in which we live.

Serotonin is a chemical which acts as a neurotransmitter in the brain – meaning that it signals messages from one area of the brain to another about your health and mental well-being.

Although serotonin is derived from the brain, it’s been proven that over 90% of serotonin in your body comes from blood platelets and your digestive tract. Serotonin’s makeup includes tryptophan and tryptophan hydroxylase which react together to form what we call serotonin.

It’s vital to your well-being and health for the brain to relay proper messages from one part of the brain to another so certain psychological and bodily functions can be met.

Mood, appetite, sleep patterns, sexual desire and memory depend on serotonin as a powerful influence that regulates how they function.

Other ways serotonin helps is to help the proper functioning of our muscles and cardiovascular system. The link between serotonin levels and stress and depression has been proven beyond a doubt.

An imbalance of serotonin can lead to a state of depression and the ability to handle stress is greatly reduced. Serotonin is made from the chemical tryptophan which is critical for helping serotonin reach the brain’s receptor areas.

A biochemical shortage can cause mood swings and other problems which may result in depression and anxiety. The simple act of digging in the natural element of the earth can boost serotonin levels and help regenerate brain cells that keep us from becoming depressed.

Many anti-depressant medications are designed to boost the serotonin levels to provide a chemical-induced reaction in the brain. Gardening is a much better choice to help alleviate stress and depression.

Besides having the experience of creating something worthwhile and helping to send healthful and mood-lifting messages, you can also enjoy the harvest of the garden you’ve created – another boost to your health and well-being.

Some researchers even suggest that the simple act of inhaling Mycobacterium vaccae during a walk in the garden can invigorate a happy state of mind. Further research adds that ingesting the food you grow from your own garden further helps alleviate a depressive mood.

Most of us have experienced the smile and laughter a small child elicits when allowed to dig in the dirt. Just being there and having fun while enjoying the health and mood-lifting benefits of Mycobacterium vaccae can help a child’s mental state and even make him or her sleep better.

So, dig in the dirt to get your daily dose of Mycobacterium vaccae and to boost your mood with a vital lift in serotonin levels.